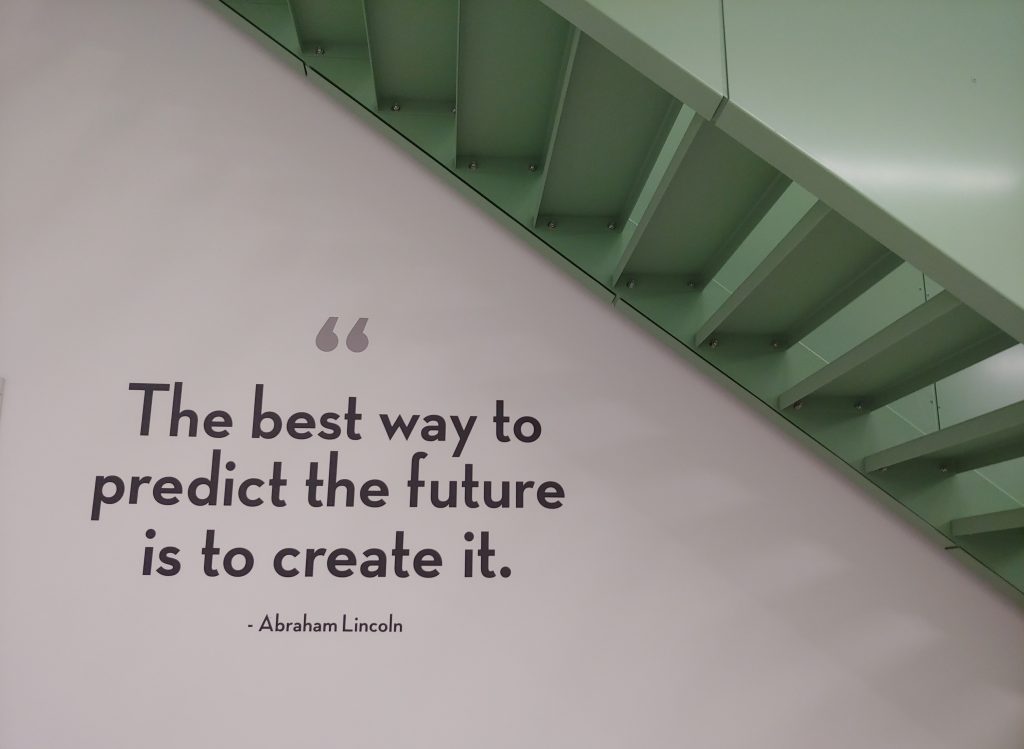 I love to give trainings at places where they have quotes from great speakers on the wall.

Yesterday, it was this quote from Abraham Lincoln:

The best way to predict the future is to create it.

Phrases like these get quoted for a reason: they say something meaningful with rhythm and concision.

Try to cut a word from this quote without losing meaning. I don’t think it’s possible. It’s an utterly portable phrase. That Abraham Lincoln would give the world such a phrase is little wonder. After all, he spoke the Gettysburg Address, one of the most memorable speeches of all time and certainly the most famous short speech of all time.

It has often been pointed out that the Gettysburg Address is not only short but consists mostly of one syllable words. With around 270 words, it takes under three minutes to deliver.

Four score and seven years ago our fathers brought forth on this continent, a new nation, conceived in Liberty, and dedicated to the proposition that all men are created equal.

Now we are engaged in a great civil war, testing whether that nation, or any nation so conceived and so dedicated, can long endure. We are met on a great battle-field of that war. We have come to dedicate a portion of that field as a final resting place for those who here gave their lives that that nation might live. It is altogether fitting and proper that we should do this.

But, in a larger sense, we can not dedicate, we can not consecrate, we can not hallow this ground. The brave men, living and dead, who struggled here, have consecrated it far above our poor power to add or detract. The world will little note nor long remember what we say here, but it can never forget what they did here.

It is for us the living rather to be dedicated here to the unfinished work which they who fought here have thus far so nobly advanced. It is rather for us to be here dedicated to the great task remaining before us — that from these honored dead we take increased devotion to that cause for which they gave the last full measure of devotion; that we here highly resolve that these dead shall not have died in vain; that this nation, under God, shall have a new birth of freedom; and that government of the people, by the people, for the people, shall not perish from the earth.

What can we, mere mortals, learn from Lincoln and his Gettysburg Address? This speech runs so deep, it would need a long essay to do it justice (there’s the biblical allusion of ‘four score’, there’s the metaphor of birth and rebirth, there’s the fact that he turns a eulogy into a call to action, not to mention the  rhetorical devices like the tricolon ‘of the people, by the people, for the people’). I’d like to highlight three things we too can do:

The last point is particularly intriguing because it is a great myth surrounding the Gettysburg Address that Lincoln wrote it spontaneously on the train to Gettysburg. This is known to be untrue. We don’t know exactly how many days Lincoln worked on the speech but work on it he did. Just because its short doesn’t mean it’s easy to pull off. As the French philosopher Blaise Pascal famously wrote in his Lettres Provinciales: “I would have written a shorter letter, but I did not have the time.”