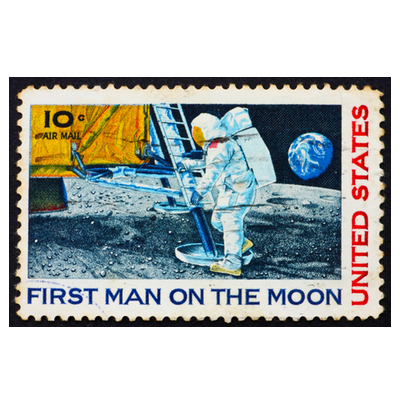 You probably heard JFK’s call from 1961 to “put a man on the moon and return him safely by the end of the decade”?

This message had the power to rally an entire country.

It set a goal.

And it was simple, so simple that we don’t stop and think how difficult it may have been to come up with.

That’s why I like the alternative version that the Heath brothers give in Made to Stick. It’s this:

“Our mission is to become the international leader in the space industry through maximum team-centered innovation and strategically targeted aerospace initiatives.”

Yes, it’s made up. And, yes, it’s a little exaggerated but, boy, does it sound familiar. I like it so much because it shows how jargon can stand in the way of what we have to say.

Of course, JFK’s version makes the jargon-version look ridiculous. But the truth is that no one is immune to using such language. I mentioned here how breaking away from jargon needs a conscious effort. It was no different for JFK.

Take a look back to the 60s. The US and the Soviet Union were in the middle of the space race. This race was about more than the moon.

It was also about manned spaceflight and satellites. There were many aerospace initiatives; there was more than one goal. And of course JFK was surrounded by people who spoke jargon. It can’t have been easy to isolate one goal (humans on the moon) and to find such actionable words for it:

…to put a man on the moon and return him safely.

How did JFK do it?

The answer is a process.

This process starts with an intent. There was a will to dig deeper and ask: “What is this one thing that we really want?”

And there was a will to put this into words that everyone understands. Though I cannot prove it, I am sure that this went hand in hand. The search for simple words helped to see the vision in the first place.

Because that is the problem with difficult words: they cover up the true meaning. They have an aura of precision, when they are not precise at all.

“If you can’t explain it simply, you don’t understand it well enough.“Albert Einstein

I experience this often when I interview people. As the interviewer, I am an outsider. Be it an engineer or a physician, I don’t understand as easily as a colleague would.

And that’s a good thing because I can ask again. And when people explain again, in easier words, more often than not, something magical happens: they see their own work in a clearer light; and they are always grateful for it.

The simplest question you can ask yourself

You can use this mechanism on yourself. You only have have to ask: “How would I explain this to a child?”

We all know that answering children’s questions isn’t easy. They make us question what we don’t question anymore.

And that’s a good thing because it’s only when we strip things down to the core that we discover what we really need to say.

3 thoughts on “How to know what you need to say”