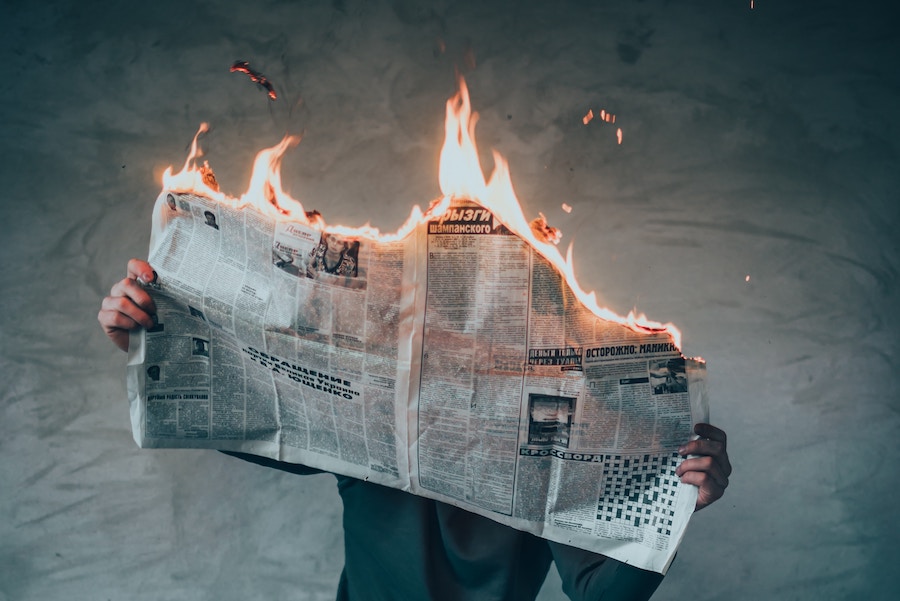 How do you engage with a book?

I’ll have a guess:

You look at the cover first.

Then you turn to the back for the reviews.

If it’s a hardcover, the flaps are next.

Why do we read that way?

Because the reading brain is lazy: it wants an easy start. It wants to find out about the book before diving in. And it wants this information without investing energy.

It’s the same for all printed texts. You can see the principle in action in this video of a man reading a newspaper. Special glasses trace the movement of his eyes:

The pattern is clear.

The eye jumps to those places that are easy to grasp: headlines, photos, teasers, sometimes a piece of text. ‘Reading’ is actually a misleading word for the man’s activity. He is not reading so much as he is scanning the page.

It’s true, this guy isn’t overly interested in the publication. He’d probably read more in a magazine that he really likes. But it’s still a good reminder: people don’t just jump right into our texts.

That’s easy to forget. It’s easy to fall into the trap: to assume that people start to read just like that. They don’t. They only read when we manage to turn them from scanners into readers.

So how do you turn scanners into readers?

The snippets – those snippets that the eye looks at first – need to have stopping power. They need to call the reader’s attention.

That is common sense in a way. We all know that headlines exist for that purpose. But are we putting enough effort into them?

I often find it hard to come up with a good headline. And it’s tempting to take the first that comes to mind. But why would I do that? If I want you to read my text (and why would I write if not), I have no choice: my headline has to tell you why you may want to read the text.

And what about the other elements?

Our pictures for example. Do they draw interest?

Many publications and many websites miss out on that. Take a stock photo like this. We’ve seen it a million times. It won’t get anyone interested in anything.

Or what about photo captions?

They are one of those snippets that the brain loves to look at. You could use the caption to merely describe what’s on the picture. But that’s not its real purpose. The real purpose of the caption is to get people to read your text.

See it as a series of opportunities:

If your headline doesn’t draw attention…maybe the photo will.

If the photo doesn’t draw attention….maybe the caption will.

And if the caption doesn’t? Maybe a side-quote will.

Photo by Elijah O’Donell on Unsplash

3 thoughts on “Get your reader started”